Easter is approaching as we write these words. The next few weeks are with little doubt the most important ones in the Western calendar, when people celebrate the cycle of death and rebirth or the renewal of ancient promises according to their most inner beliefs. For centuries many different cultures and religions also celebrated similar rites of passage, adding on to a corpus of traditions and giving birth to many long-lasting symbols, some of which made their way back into our daily life in the most unsuspected form.

Take eggs for example. Nowadays, we exchange chocolate or colored eggs as a gesture of good will during Easter, but in ancient times the egg was a powerful symbol with a strong spiritual value. For some cultures it was a metaphor of the power of life, a symbol of nourishment or fertility, even a symbolic representation of the universe – in the form of a perfectly self-contained microcosm just waiting to spring into existence.

Even the ancient inhabitants of the Land of Chianti Classico attached great importance to the egg as a cosmogonic symbol of death and rebirth, so much that they adorned their tombs with large egg-shaped stone sculptures. We are talking about the Etruscans, the ancient dwellers of our hills. The Etruscans are people shrouded in mystery: and what we know about them is limited to the results of archeological findings and related researches. Nevertheless, their art speaks to us across the ages thanks to the many artifacts and artworks left behind in the myriad of tombs and necropolis that are an integral part of the beautiful landscapes of Tuscany, Umbria and Lazio. 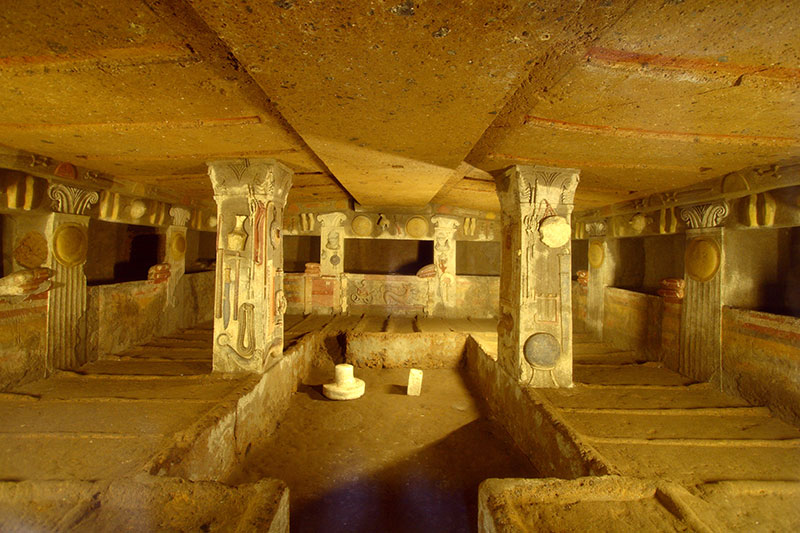 These stone ruins are a mute testimony to the people who first inhabited these lands and hills over two thousand years ago. The most recent findings indicate that they already knew how to cultivate grapes for winemaking, and that they were also experts in wine storage (by keeping it in buried jars) and transportation (the latter was achieved by applying a coating of tar, tree resins or a special mix of wax and honey to the inner surface of wine containers to prevent the wine from altering).

The Cultivation of Grapes

It can be safely assumed that it was the Etruscans who first introduced the cultivation of grapes in the Chianti Classico region: we know that they employed two distinct cultivation methods and that they could rely on at least two different varieties of grape for cultivation. Sadly, no trace is left of what may have been the most ancient vineyards of Tuscany. They vanished together with the Etruscans in the mists of history.

Luckily for us, there is one thing which survived unscathed across many centuries until today, and it is the beautiful Land of Chianti Classico, where sun, air, and a soil full of ideal characteristics combine with unique climate and biodiversity to become the true reason why grapes flourish and vineyards prosper among these hills.

It is with this heritage in mind that when Montemaggio was born many years ago. Thanks to the commitment of the owner Valeria Zavadnikova, the choice fell on an Etruscan woman carrying a basket of grapes when it came to decide what should be the official symbol of Montemaggio.

The egg, the mystic symbol found in many tombs, was intimately connected to the cult of the Mother Goddess who granted the blessing of fertility to Women and Earth alike. Our wine can count on an additional female touch, thanks to the skillful hands of our agronomist Ilaria Anichini, who has worked here since 2005 taking care of the vineyards and other plantations, making sure that the biodiversity is fostered, the immune system of the plants, trees and flowers is reinforced and the cycles of the nature are respected with the aim to give birth to authentic wines.

Women were an essential part of Etruscan culture by also being actively engaged in society, taking part to banquets and athletic competitions. Ilaria and Valeria are thus the nearest end of a thread that reaches far back two millennia, connecting to those Etruscan women whom we like to think of as our forebears, brimming with the same passion for life and nature which is the true source of our commitment to our Winery.